21Shares, a Swiss provider of exchange-traded cryptocurrency products (ETP), has seen its assets under management rise 100% in the past two weeks.

According to the announcement, the huge increase in 21Shares’ ETP crypto business is largely due to the rapid adoption of cryptocurrency by institutional investors, as well as the availability of the products on regulated European exchanges.

Mr. Rashwan said institutional investors can invest in 21Shares’ cryptocurrency FTEs by using the International Securities Identification Number, or ISIN, which is a global standard used to identify certain securities, such as bonds, stocks, derivatives and others:

“With such high institutional demand for cryptocurrency exposure via an ISIN, we have gone from announcing UM500 million to over $1 billion in less than two weeks. For many asset managers, private banks, family offices and individuals, it is quickly becoming reasonable to invest in cryptocurrency assets.”

According to a product breakdown in the announcement, the majority of total 21Shares assets under management come from 21Shares Binance BNB FTE (ABNB) – an FTE that tracks the investment performance of Binance Coin (BNB). BNB’s dominant share of total assets under management comes against the backdrop of Binance Coin’s recent surge, making it the world’s third-largest cryptocurrency on February 19. 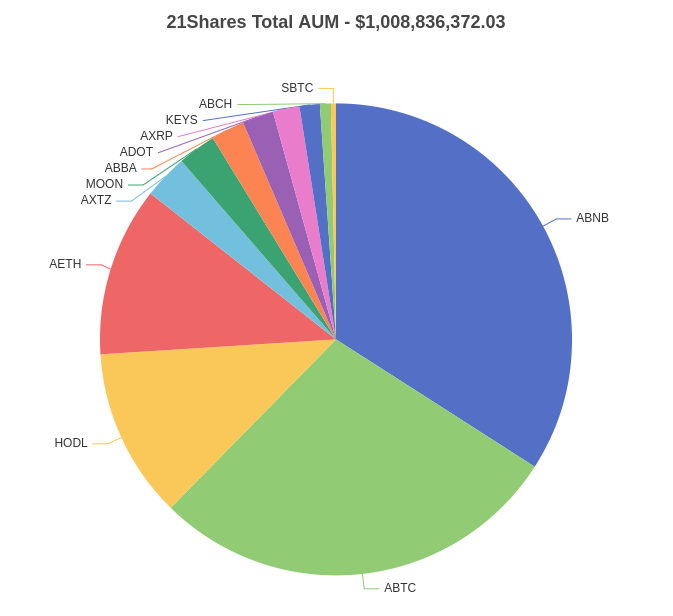 Formerly known as Amun AG, 21Shares is known for having launched the world’s first multi-crypto FTE, which was listed on the SIX Swiss Exchange in November 2018. In just over two years since launching its first encrypted FTE, 21Shares has actively diversified its encrypted FTE offering and seen its assets under management grow 200-fold. In early February, 21Shares launched the world’s first Polkadot-based FTE (DOT).