Bitcoin (BTC) faces near $ 50,000 in rejection, suggesting bears are unwilling to give up without a fight. Many analysts expect Bitcoin to rise in the final quarter of the year, and PlanB, the inventor of the stock-to-flow model, says the “worst-case scenario” for Bitcoin is $ 63,000 in October and $ 98,000 by November amounts to.

PlanB is not alone with its bullish forecast. Using Bitcoin’s Relative Strength Index (RSI) indicator over the four-year cycle, Twitter commentator TechDev suggests that the second leg of the bull run in 2021 may only be just beginning. the trader expects the top of the Bitcoin cycle to be around $ 200,000. 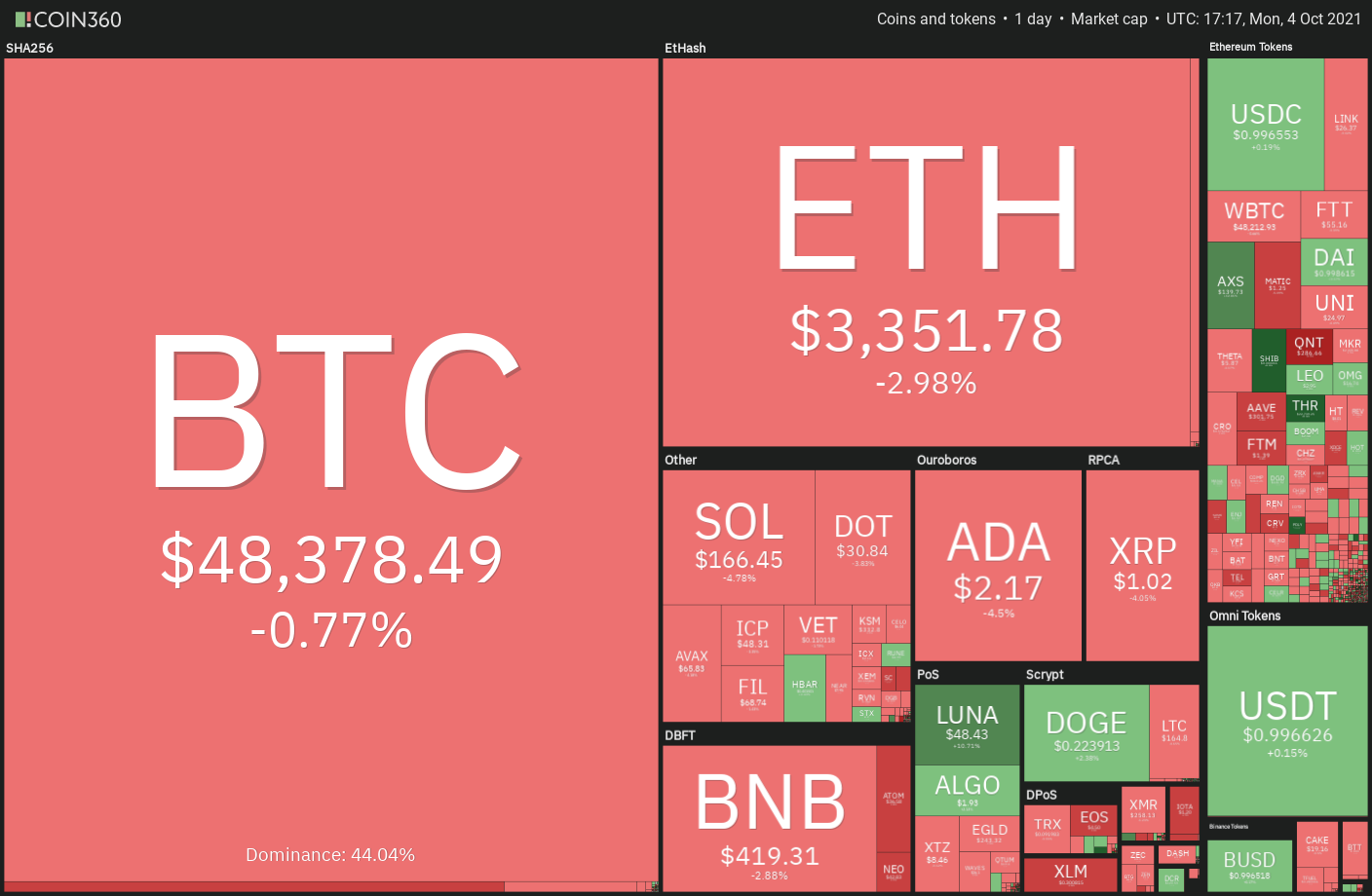 While historical projections point to a rally in the final quarter, the increase may not be linear. According to CFRA chief investment strategist Sam Stovall, the volatility of the US stock market in October was 36% above the average for the remaining 11 months. Because of Bitcoin’s high correlation with the S&P 500, traders can experience a roller coaster ride in October.

Could Bitcoin follow its historical role model and recover to the top? And will Altcoins join the party? Let’s check out the top 10 cryptocurrency charts to find out.

The bulls pushed Bitcoin above the overhead resistance at $ 48,843.20 on October 3, but the long wick on the daily candle suggests the bears are aggressively defending the level. The price has traded between the 50-day simple moving average (SMA) ($ 46,667) and $ 48,843.20 for the past two days. 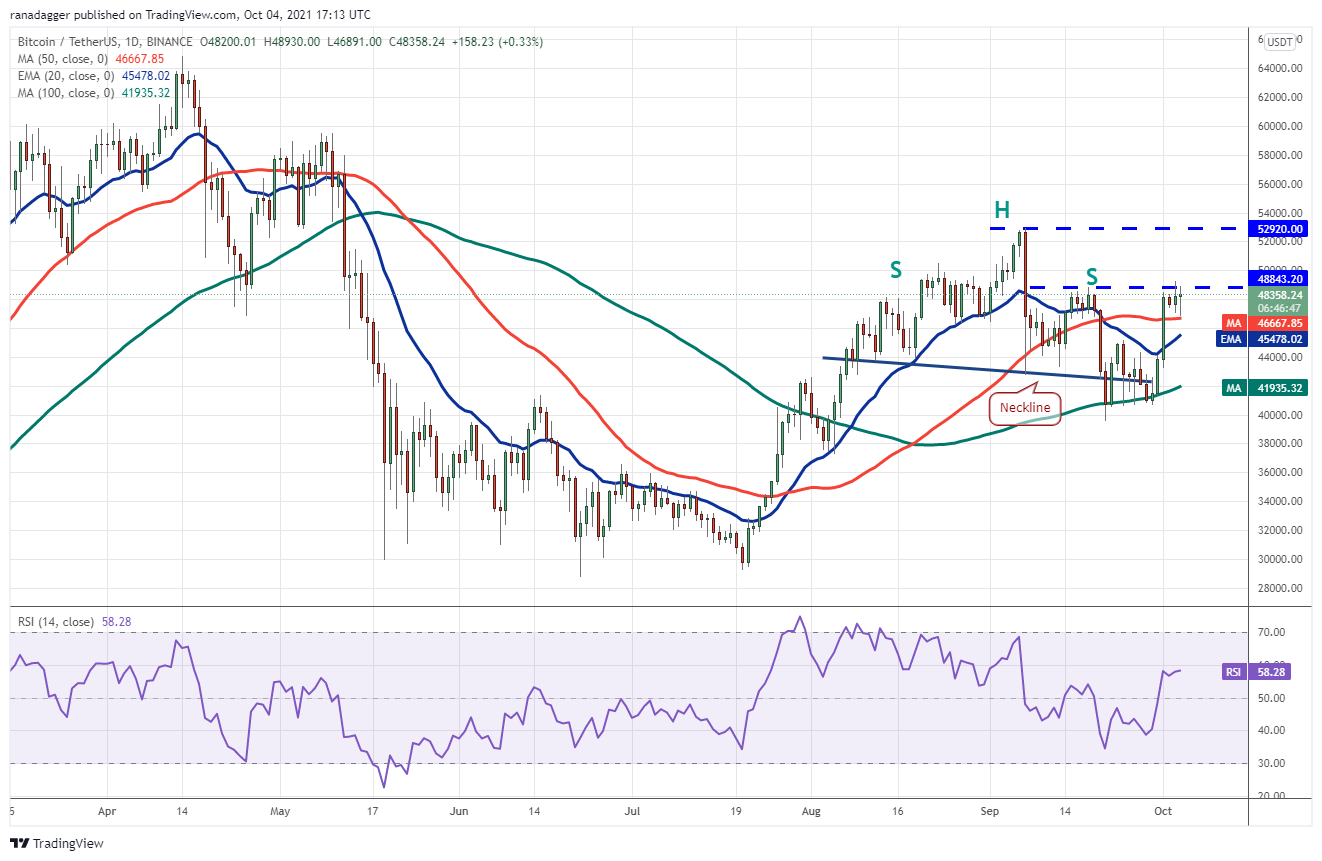 The 20-day Exponential Moving Average (EMA) ($ 45,478) is up and the RSI is in positive territory, suggesting that the path of least resistance is up.

Contrary to this assumption, if bears pull the price below the 50-day SMA, the pair could fall to the 20-day EMA. A rebound from this support will be a positive sign and the bulls will make another attempt to break the overhead hurdle.

The bulls pushed Ether (ETH) above the downtrendline and moving averages on October 1st, but the bears haven’t thrown in the towel yet. The sellers are trying to stop the upside move near $ 3,500 and pull the price back below the 50-day SMA (3,297). 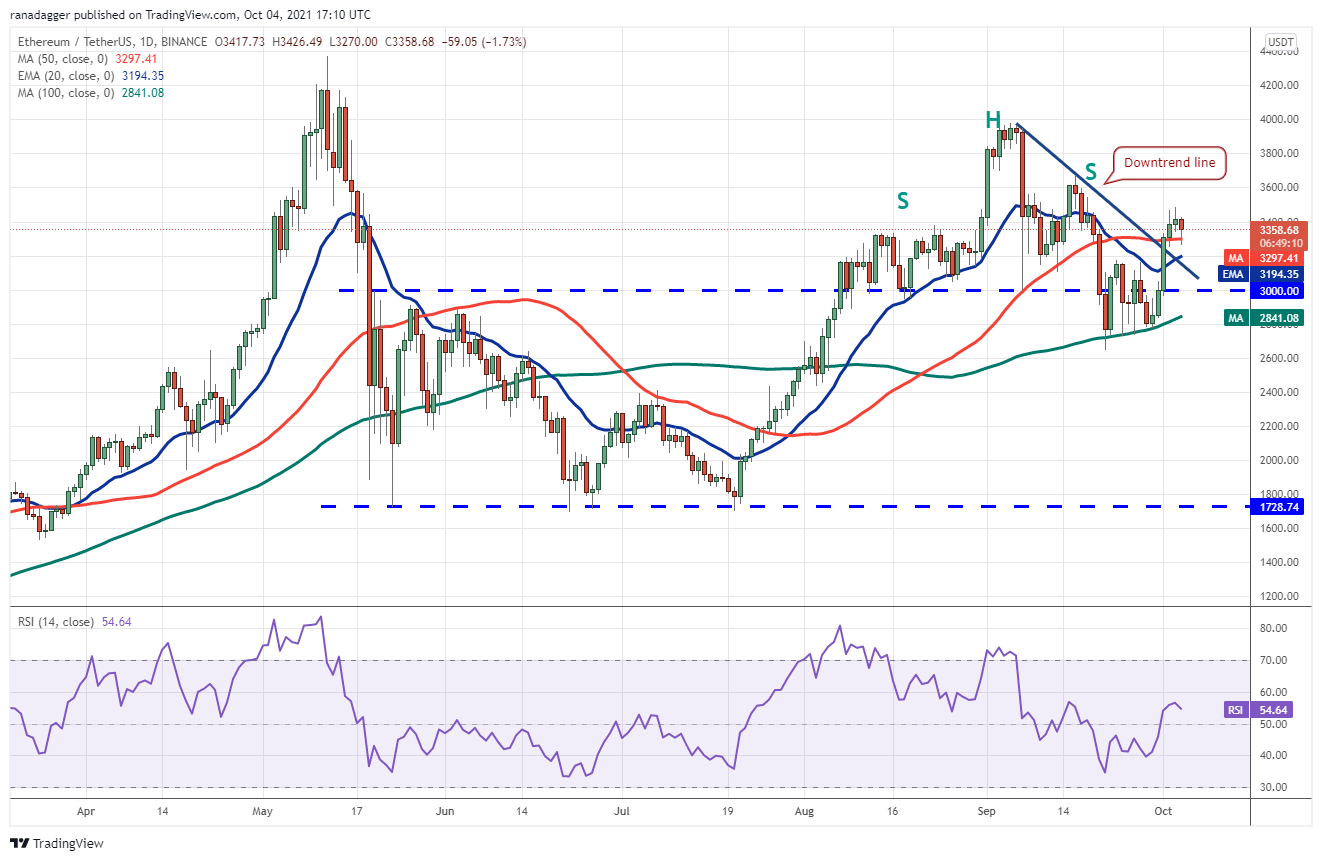 Alternatively, if price rebounds from the moving averages, the bulls could make another attempt to push the price above $ 3,500. If the price holds above this resistance, the pair could rise to $ 3,676.28, then $ 4,000.

Binance Coin (BNB) had encountered strong resistance at the overhead resistance at $ 433, but the positive sign is that the bulls haven’t given up much ground. This suggests that buyers are holding onto their positions as they anticipate an upward move. 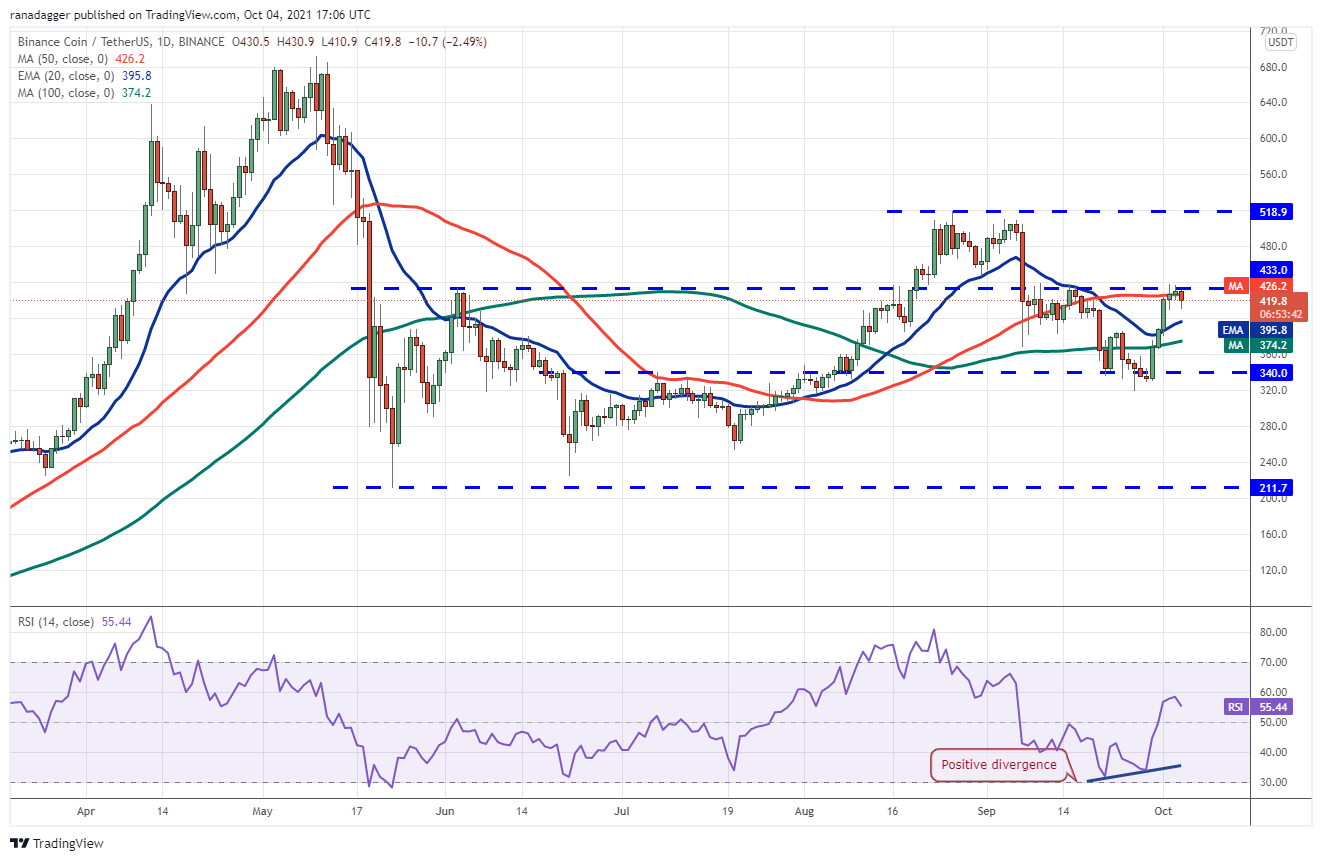 Contrary to this assumption, the pair can fall to the 20-day EMA if the price drops from current levels. If the price recovers from these levels, the bulls will try again to push the pair above $ 433. A break and close below the 20-day EMA could keep the pair in the range for a few days.

The bulls have pushed Cardano (ADA) above the 20-day EMA ($ 2.25) for the past two consecutive days, but they have failed to hold the higher levels. This suggests that sentiment remains negative and traders are defending the 20-day EMA. 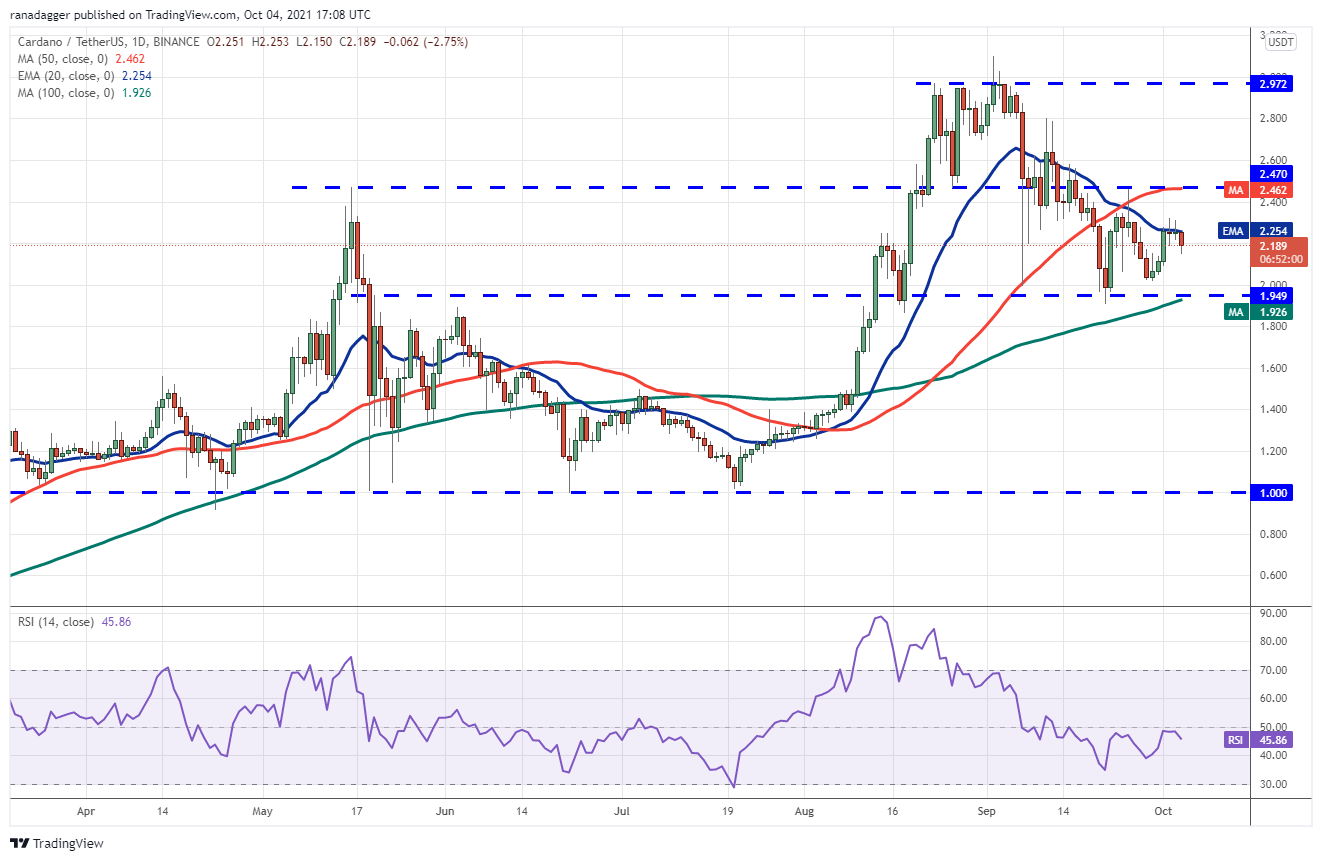 The price fell off the 20-day EMA on October 4th and the bears will now seek to lower the ADA / USDT pair to the critical support at $ 1.94. If that level declines, the pair could see aggressive selling and fall to $ 1.60.

This negative view will be invalidated if the price rises from current levels or bounces off the USD 1.94 support and rises above the 20-day EMA. The pair could then rebound to the 50-day SMA ($ 2.46) where bears could build strong resistance again. A break above this level could pave the way for a move higher to $ 2.97. 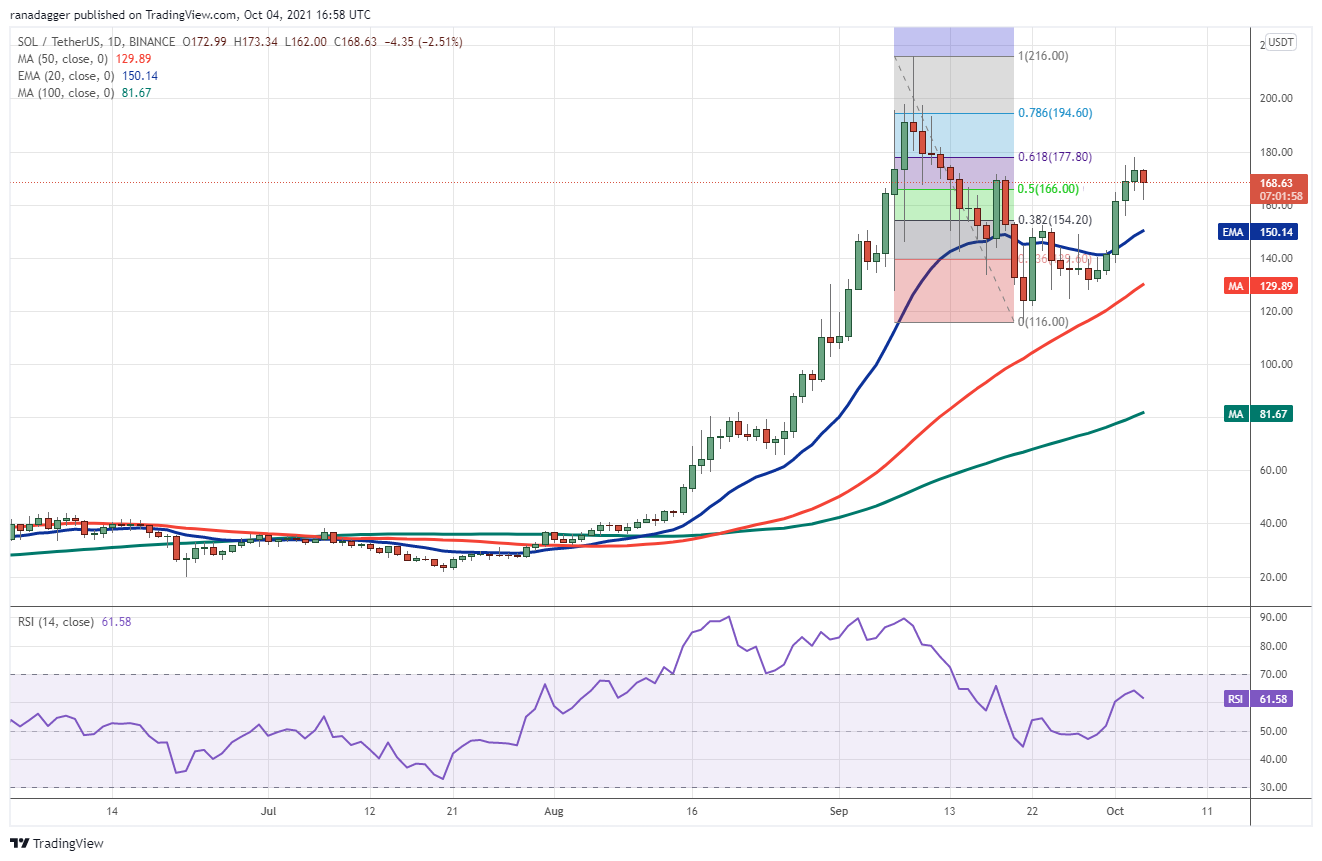 If price rebounds from current levels or the 20-day EMA, it suggests that the bulls will buy on dips. That increases the likelihood of a breakout above $ 177.80. If so, the SOL / USDT pair could rise to $ 200 and then retest the all-time high at $ 216.

Alternatively, if the price drops from current levels and falls below the 20-day EMA, it indicates that traders are closing their positions. The pair can then fall to the 50-day SMA ($ 129) and then to $ 116 later. 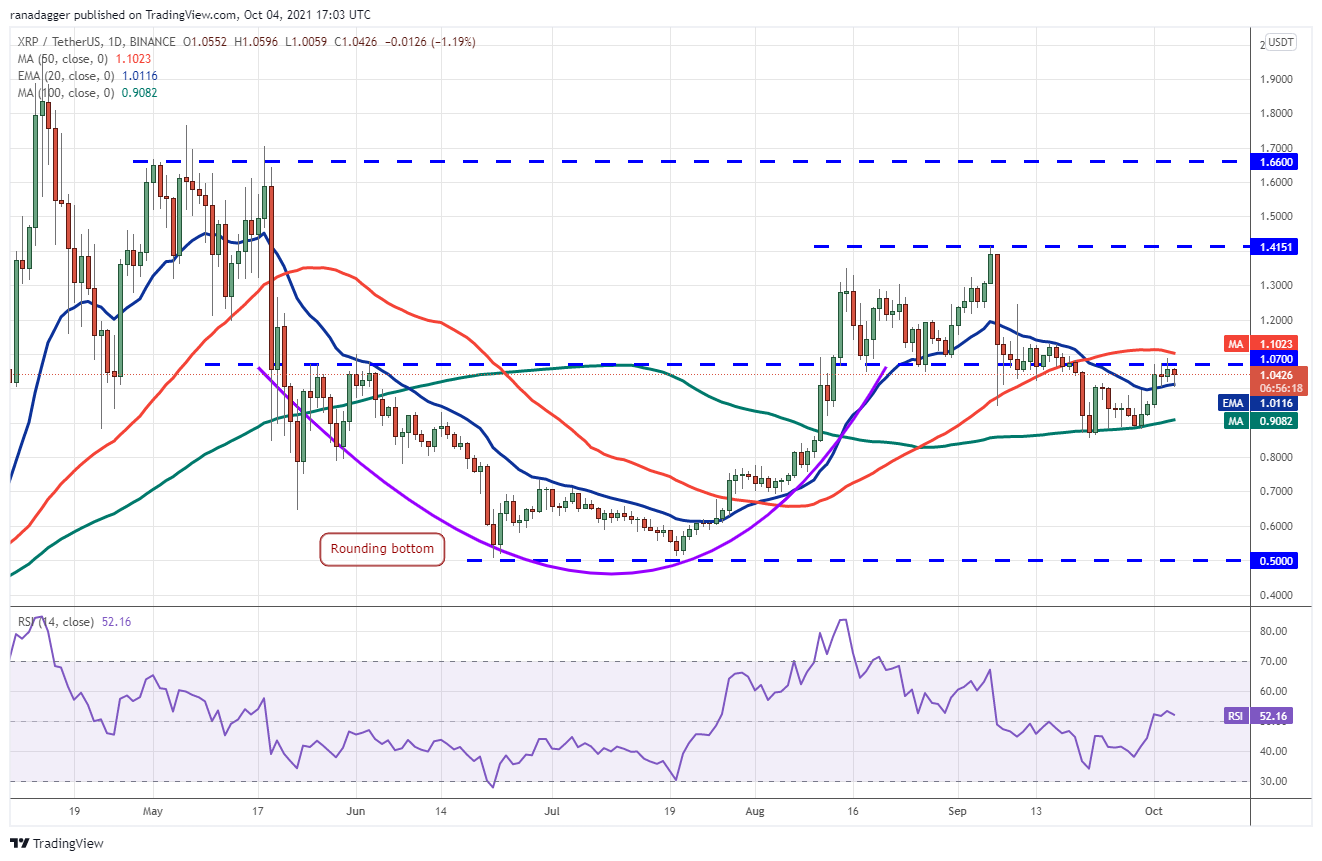 The price is currently stuck in the narrow range between the 20-day EMA and the 50-day SMA. Both moving averages are flat and the RSI is near the middle, which suggests an equilibrium between supply and demand.

This balance will tend in the buyer’s favor as the price breaks through and holds above the 50-day SMA. The XRP / USDT pair could then begin its journey to the nearest resistance at USD 1.41.

On the contrary, if the price breaks below the 20-day EMA and holds, the pair could fall to the 100-day SMA ($ 0.90). A break below that support could signal that the bears are in charge again.

Polkadot (DOT) broke the moving averages and downtrend line on October 1st, which was the first indication that bears might lose their hold. The bulls attempted to push price above the right shoulder of the head and shoulders pattern on October 2nd, but the long wick on the daily candle suggests selling at higher levels. 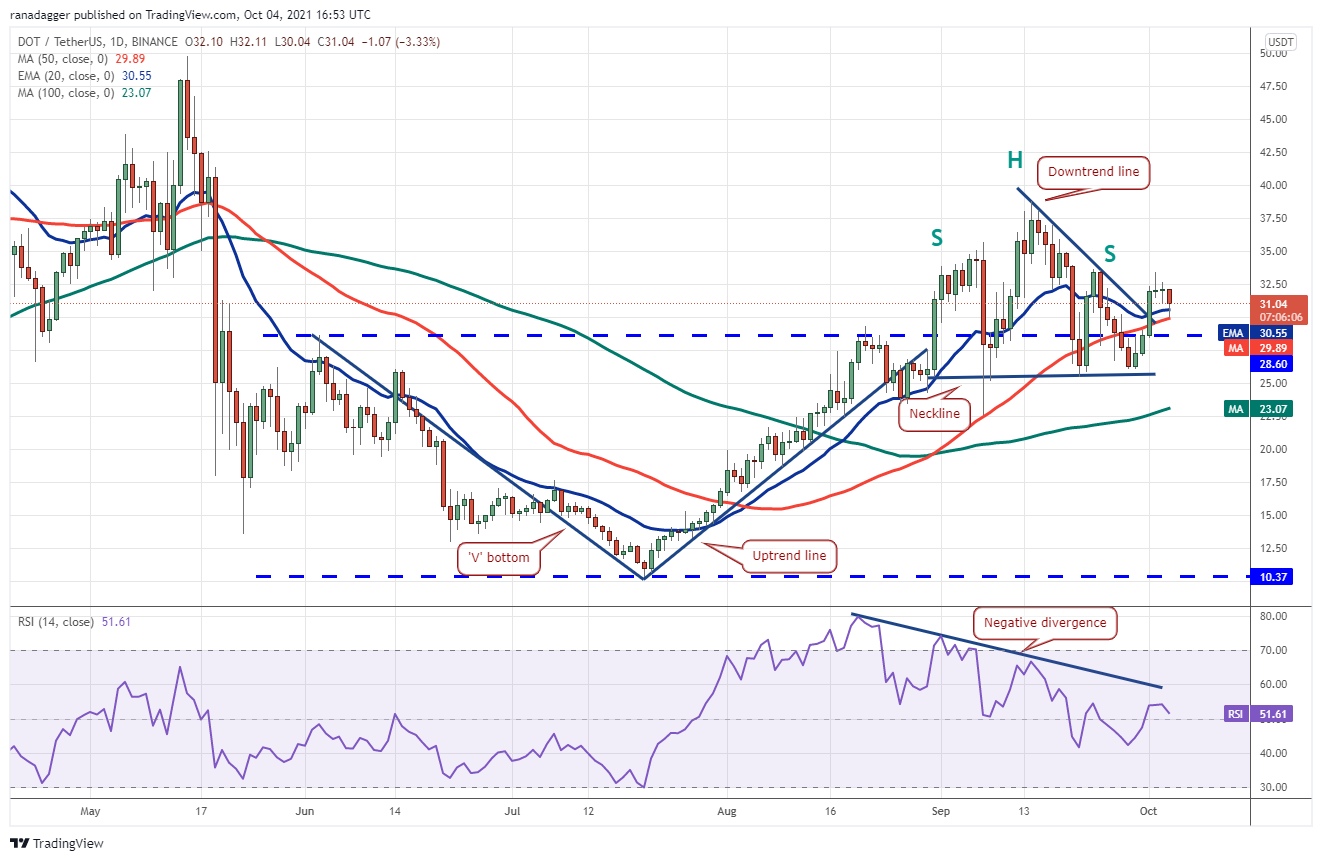 The DOT / USDT pair formed a doji candlestick pattern on October 3rd, indicating indecision between bulls and bears. That uncertainty cleared to the downside on October 4th and the bears are trying to bring the price below the moving averages.

If they are successful, it suggests that sentiment will remain negative and traders will sell on rallies. The couple could then challenge the neckline of the H&S pattern.

Conversely, if price rebounds from the moving averages, the bulls will try again to push price over the right shoulder and retest the critical resistance at $ 38.77.

Dogecoin (DOGE) rebounded to the 20-day EMA ($ 0.22) on October 1, but the bulls have not been able to keep the price above this resistance for the past few days. This shows that sentiment is negative and bears are selling on rallies. 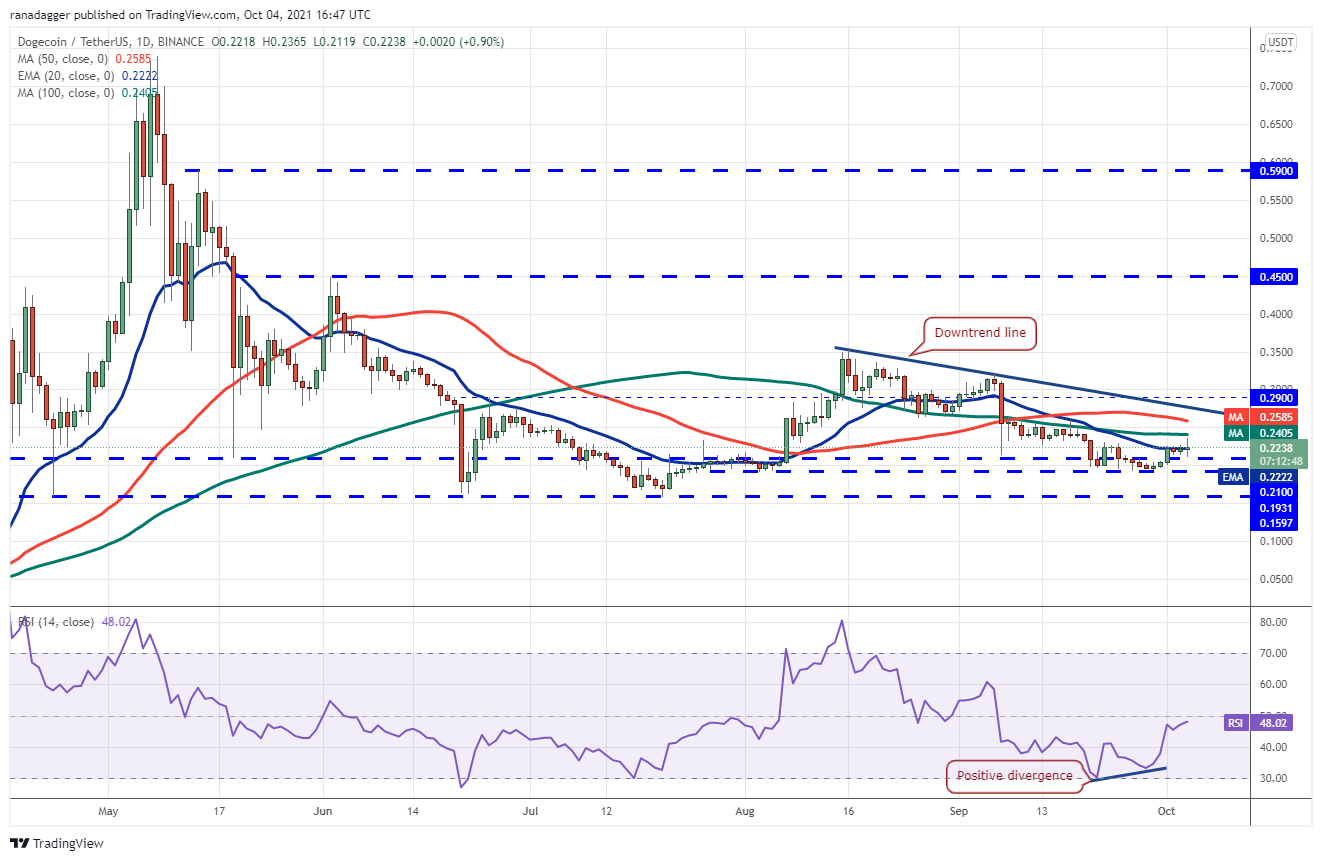 On the contrary, if the bulls drive and hold the price above the 100-day SMA, the pair could rise to the downtrendline, which in turn could act as a rigid resistance. A breakout and a close above this level are the first signs that the correction may end.

The long wick on the October 3 candle suggests that the bears tried to defend the $ 45.01 level but failed to hold the lower level. Aggressive purchases by the bulls on October 4th drove the LUNA token of the Terra Protocol to a new all-time high. 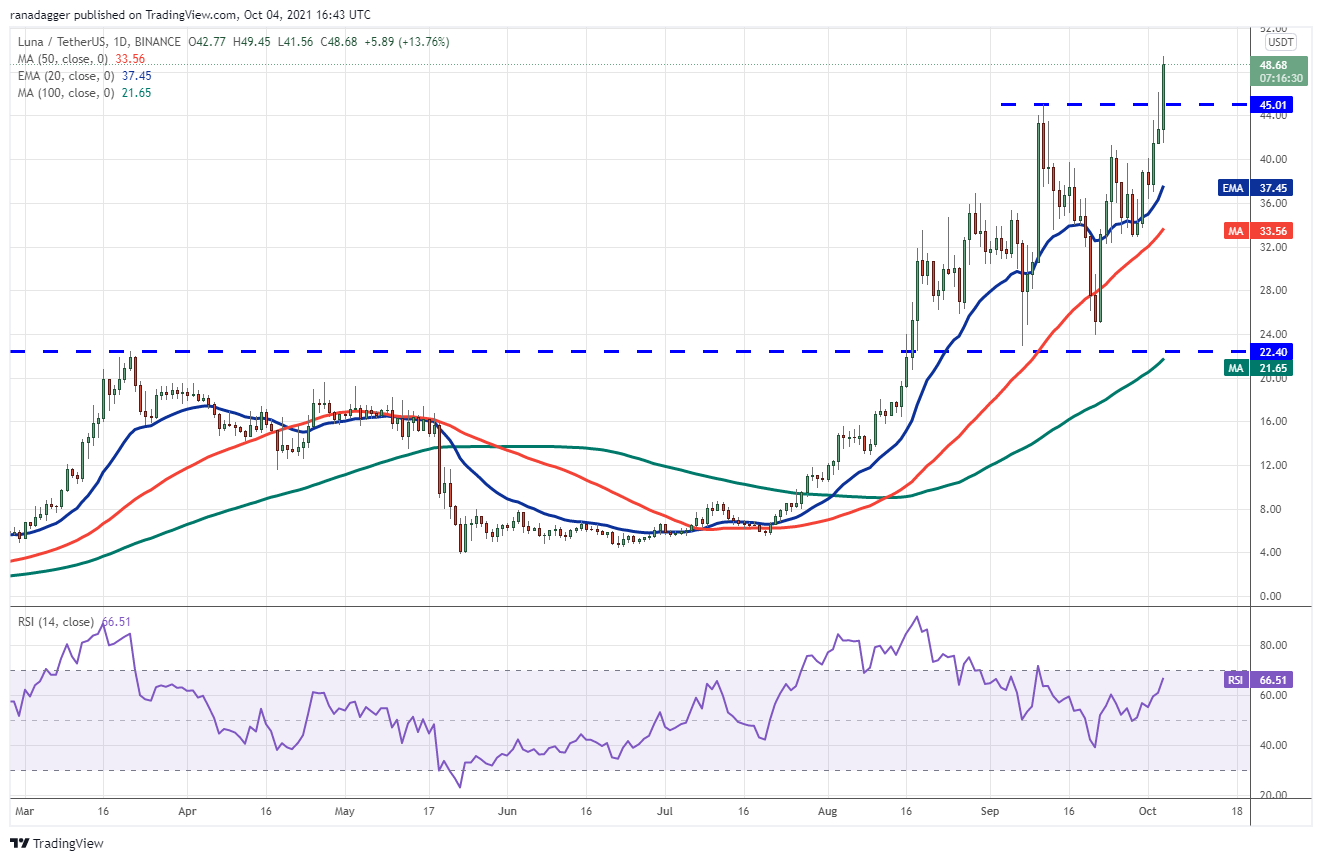 If the bulls hold the price above $ 45.01, it signals the start of a new uptrend. The rising moving averages and the RSI in positive territory show that the bulls are in control. The LUNA / USDT pair could climb to $ 50 initially, and once that psychological hurdle is cleared, the next stop could be at $ 65.

Conversely, if the price fails to hold above $ 45.01, the bears will attempt to push the price down to the 20-day EMA ($ 37.45). A strong rebound from this support will suggest that the positive sentiment is intact. The bears will need to decline and keep the price below the 50-day SMA ($ 33.56) to get the upper hand.

Uniswap (UNI) rose above the 50-day SMA ($ 25.46) on October 2, but the long wick on the daily candle suggests that bears were selling at higher levels. The altcoin formed an inside-day candlestick pattern on October 3rd, indicating indecision between bulls and bears. 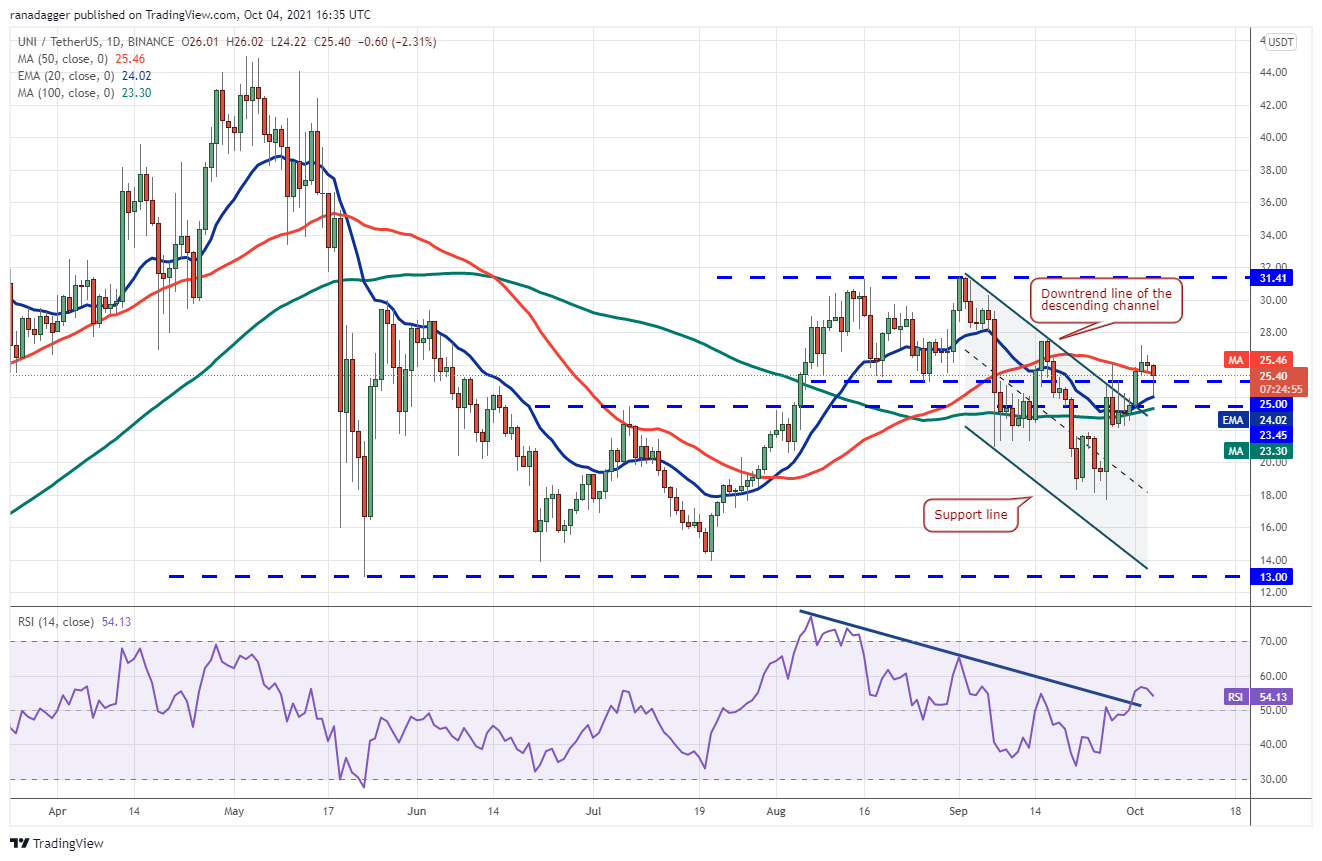 The uncertainty eased and the bears pulled the price to the 20-day EMA ($ 24.02) on October 4th, but a positive sign is that the bulls aggressively bought the dip, as they did on the long tail Can recognize day candle.

On the flip side, the pair could fall to $ 22 if the price falls below the moving averages. This is important support for the bulls to defend because if it cracks the decline could extend to $ 18.

The views and opinions expressed are those of the author only and do not necessarily reflect the views of Cointelegraph. Every investment and trading movement carries risks. You should do your own research when making a decision.

The crypto markets and global equity markets saw a sharp rebound on November 29, despite…

Bitcoin (BTC) and most of the major altcoins remain below their respective overhead resistances, suggesting…